With passion for breeding we keep one broodmare at Kamphuis Stables. Founder of this breeding line is Maarten's father Paul Kamphuis.

In 1992 he bought from the Denneboom Family the thoroughbred mare Saber xx (Tangelo xx). As Paul Kamphuis always has been a fan of the stallion Jasper, Saber xx was covered by Jasper's son Boreas. She produced a filly, Laurie, who was acquired as a young horse by Maarten's uncle Peter Kamphuis.

In 1996 Laurie produced the filly Olanta (Kojak) and came under the saddle. After a few courses at 1.00m level she went to a new owner.  Years later, Olanta hit the headlines as a successful Grand Prix show jumper called Sassicaia.

The foal Olanta grewed up very well and as a 4-year-old Maarten Kamphuis bought her half. She qualified for the final of the IAN trophy for 4-year-olds, where for Peter Geerink was asked as rider. Under Geerink she shows all her qualities and after two days the shared first place in a field of 180 horses. Through Maarten & Jurgen Stenfert she was sold to France.

After some investigation breeding Olanta was not a fluke. The thoroughbred mare Saber xx came from a very well-known Irish thoroughbred damline that had produced several very good sports horses.

Maarten then decided to trace Olanta's dam, Laurie. Through some wanderings he arrived at a stable of the mounted police and after some negotiations, Maarten managed to buy the mare. Under the guise of 'Never change a winning team Laurie was covered by Kojak again. The result: a filly in 2001 with the name Up Town Girl. She was trained up to 1.20m level, before she want to Slovenia where she jumps at 1.45m level with Young Rider Tajda Bosio.

In 2003 Laurie gave birth to the black colt Woody (Karandasj), which was sold after a few 1.00m courses to the Munsterhuis family. With Jochen Munsterhuis he was very successful in the international Youngster Tour classes, before he came under the saddle of Vitor Alves Teixeira and became a 1.50m showjumper. 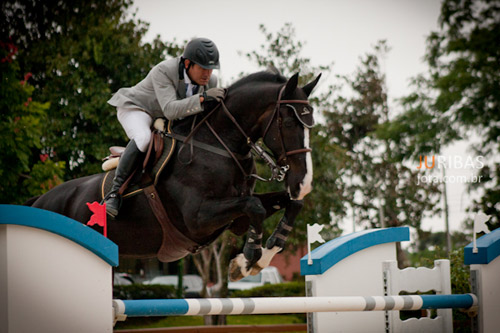 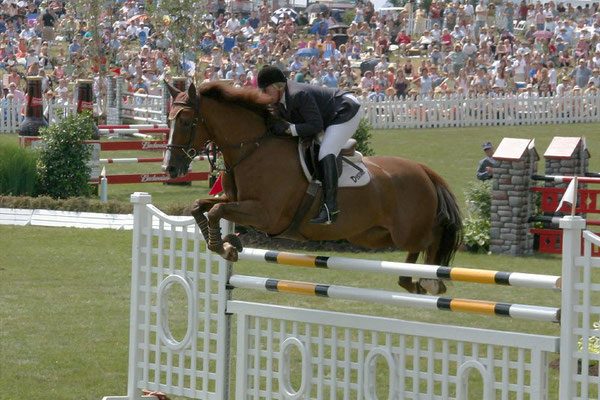 In 2004 Laurie produced the filly Zinniz MK (Kojak), who earned the KWPN predicates Prok and Sport. Steven Veldhuis jumped her at 1.35m level, before she was sold as a seven-year-old in Belgium.

In 2007 the filly Caroline (Numero Uno) followed, who was sold at the age of two to the Munsterhuis family. She became Ster and jumped at 1.30m level in The Netherlands.

In 2010, in foal to Kojak, Laurie went to a new owner. Born in 2009, Escada (Kojak) is still in our possession and the dam line may continue at Kamphuis Stables. In 2012 she received her KWPN predicates Ster and Prok.  She scored 75 points for conformation and 80 for loose jumping, with 85 points for her reflexes.

Due to the excellent results of her offspring Laurie earned her predicate 'Prestatie' on her first three offspring.